NB: All pics on this site taken by us and are therefore subject to copyright ©NotDeadYetTravel

For the first few nights our boat, the Samba, was more rock and roll than a smooth Strictly Ballroom glide across the water but it was no more than we expected and those who felt a little frail took their tablets. True, they were slightly glassy eyed at breakfast but, to the best of my knowledge no one was actually ill. And no one failed to eat all that was on offer which, given that we were at sea for eight days without a shop in sight, was pretty good. Three square meals a day with snacks, fruit juice, tea and coffee in between meant food was never an issue. 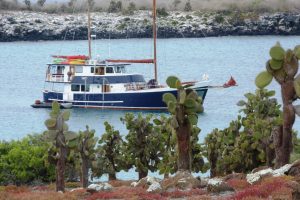 All the cabins have two bunks with the bottom one being slightly wider than the top and all have en suite facilities – small but perfectly formed. There is no ladder for the top bunk so access has to be timed to coincide with the ship’s roll. Getting down was also a matter of timing but a few crash landings and it was soon sorted.

If you and your travelling companion like to talk face-to-face then you either have to sit, slightly stooped, on the edge of the bottom bunk, or go up to the main cabin, or one sits on the bed and the other on the loo with the door held open with your foot. We found the latter served very well.

Thanks to the comprehensive itinerary sent to us by CNH Tours, we knew just where we were going every day and, if we had any doubts, the Captain allowed bridge visits where all the charts were laid out.

Our trip took us round the southern islands of the Galapagos. If you read up on the various cruises, you’ll find some who say the north is better but, truth to tell, every island was a delight in itself, every island offered something different and every island had a history all its own. Without being too corny, it was a real privilege to step onto the shore of everyone.

Our travels on day one took us to Floreana where we saw flamingos, turtles and numerous birds. 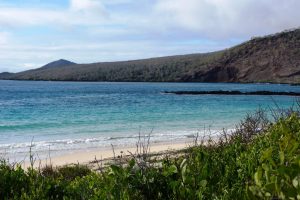 Pictured: The beach at Floreana

We snorkelled at Champion Islet and visited Post Office Bay where some of our more forward-thinking companions left pre-written post cards in a barrel to be collected by others from the same town or city. Several, which had been there a few months, were collected by our party to be delivered on returning home. This is the way sailors years ago communicated with their families and friends. A little haphazard but fun nevertheless.

In the evening we kayaked close to the shore and enjoyed the sunset. 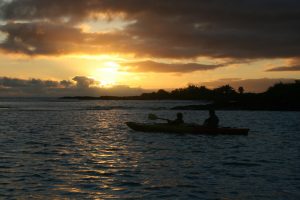 Pictured: The Galapagos at sunset

On day two we landed at Punta Suraez, Hood Island at the southernmost tip of the Galapagos. Better known as Isla Espanola, it is believed to be four million years old and is guarded by seemingly fierce sea lions on the sandy white beach and giant iguanas further inland. Every group of sea lions comprises a number of females and their pups, protected by a very large bull who ploughs up and down the shore line roaring. We were advised to keep our distance but no one told the pups, some of whom were incredibly curious and not above giving a little nip to an interesting shoe or walking stick. The iguanas, by contrast, totally ignored us, arms round each other they lay peacefully on their rocks in the sun. 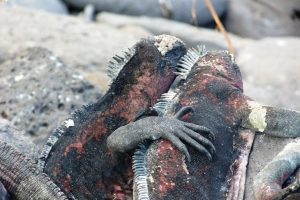 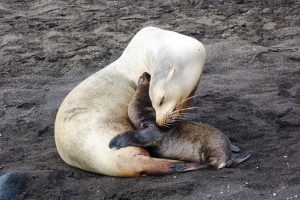 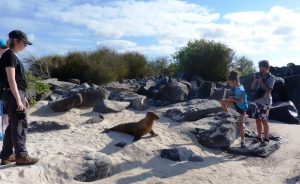 Here you may well get your first glimpse of the blue-footed booby as well as the Nazca booby which is less colourful than its cousin but no less interesting for all that. Later we saw red-footed boobies. In the afternoon we snorkelled off the picturesque Gardner Bay where the waters are calm and clear and even the inexperienced swimmers could view the marine life.

On the following day we had an early start in order to see the bird life of San Cristobel. All the boobies are there but their thunder is slightly stolen by the magnificent frigate bird which puffs out its red pouch to attract a mate. But looks are not everything, she flies down to see if his nest building skills are up to scratch. Poor DIY elicits instant rejection, however fine his chest. 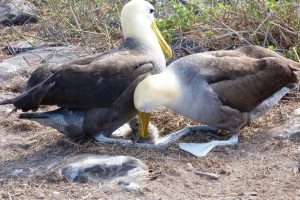 Pictured: Blue-footed boobies with their chick 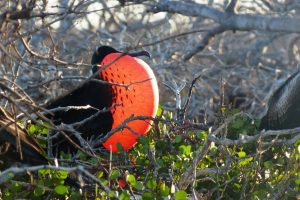 Pictured:  The frigate bird, chest puffed out in hope

Back on The Samba for lunch while we motored to a snorkelling site at Kicker Rock, the remains of a volcanic cone, erode by the sea over 100s of years which towers 500ft above the water.

But the day wasn’t done yet. For those with sufficient energy there was a mile-long trail hike at Punta Pitt on the north eastern side of San Cristobel. Here you’ll get the chance to see many, many birds including all three booby types, sea lions and lava lizards. 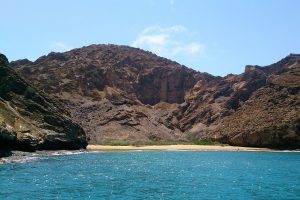 But none of these activities is compulsory. If you want to catch up with blogs, books or diaries or just to hang out on deck then you are free to do so. I ducked out of several of the late afternoon hikes. Kathy, being far more energetic than I, missed nothing.

Day four we enjoyed the delights of the tiny island of Santa Fe – just 24 square kilometres – with its sea lions, unique Barrington iguanas and the gigantic prickly pear cactus.

From here we travelled to South Plaza where we had the option of kayaking or being taken on a dinghy close to the shore to photograph the wildlife. Kathy chose the former, me the latter so we covered all bases. 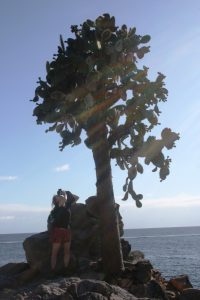 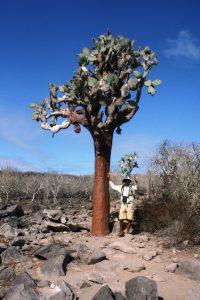 Pictured: The view from South Plaza

The following day we visited the island of Santiago where you experience the delight of knowing that you are walking in the footsteps of both Christopher Columbus, who discovered it, and Charles Darwin who visited it as part of his voyage of discovery in The Beagle. At that time land iguanas were there in abundance, now there are extinct due entirely to the activities of the people who visited subsequently.  Salt mine extraction, an attempt at colonisation, the introduction of alien plants, goats, pigs and donkeys have all played havoc with its natural ecosystem.

We spent a couple of days here, visiting the bay known as Chinese Hat, the volcanic islet of Bartolome with its 372 wooden steps to it summit, James’ Bay and the red sand beaches of Rabida. We snorkelled, swam, kayaked and photographed to our hearts content. Of particular delight were the numbers of nesting Albatross and the views across the Galapagos. 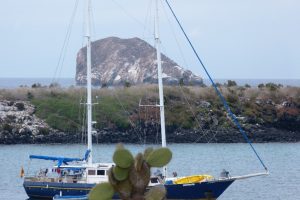 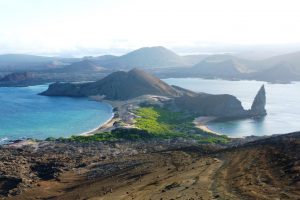 Pictured: The view from Bartolome Island

On our final morning we had an early start for a final landing on North Seymour to walk among the blue-footed boobies and colourful frigate birds.  Then back for breakfast, fond farewells and disembark at Puerto Ayora, Santa Cruz for the transfer to the Hotel Fernandina.

Before leaving bar bills were settled and tips dished out. Your tour operator will give you guidance on this. For us the advice was $100 for the guide and $200 for the crew which seemed fair enough.

While visitors are free to roam Santa Cruz visiting the Darwin Station, the turtle breeding centre, and the numerous tourist shops, the protected areas of the Galapagos Islands can only be accessed with a qualified, licenced naturalist guide. There are two or three places where camping is allowed but this involves the inevitable form-filling well in advance.

A certain level of fitness is needed to enjoy the full expanse of the islands. Every visit requires a leap from the boat to the dinghy to the shore and back again. None of the day trips are arduous but the ability to walk for several hours in the sun along occasionally rocky terrain is a must.

Swimming and snorkelling are all part of the fun. Wet suits, fins and masks are provided, although you can take your own, if preferred. We wore our own stinger suits underneath the wet suit. This was partially for added protection but also because they make getting the rubber suit on and off that much easier.

Non-swimmers are catered for to some extent. On our trip inflatable life jackets were available. Our guide or one of the crew then towed you around using a floatation aid. It’s not ideal but it gives everyone the chance to get into the water and see the remarkable marine life for themselves. Sea lions will swim alongside you to within touching distance, shoals of colourful fish and sea turtles pass underneath you and, if you are lucky, you will glimpse a hammerhead shark deep below you, as we did.

If you need to see everything through the eye of a lens, this trip will present you with many challenges. Every day, in every different direction, there were birds, plants, trees and marine life, so a few hours just absorbing the delights of nature is perhaps a good idea.